When is a good time to convert from an IRA to a Roth?

An attendee at one of our recent workshops asked us a question about Roth Conversions. Specifically, she asked “when is a good time to convert to a Roth IRA?” In short, the final two months of the year are typically when we really start acting to make final decisions about converting pre-tax money (such as IRAs, 401Ks, and other IOUs to the IRS) to never-taxed money (Roth IRA). However, there’s much more to consider before deciding to act.

“When is a good time to convert?” could be answered in several ways depending on the context of the question. Are we actually asking about the exact timing of the conversion in a given year, or are we asking whether we should be converting at all? These are two very different ways of interpreting the original question. We’ll tackle both perspectives in a handful of ways.

In this article we’ll talk about:

In the end, you should have a better comprehension as to if and when you might want to consider taking some of your pre-tax IOUs to the IRS, and converting them to a never-taxed Roth IRA.

Long-Term Planning – Would a Roth Conversion Help or Hurt You?

Start by asking yourself the following two questions:

Answer “yes” to either one of these questions, and converting some of your pre-tax money to a Roth IRA may make a lot of sense. You don’t need to make it any more complicated than that.

If your taxable income, and/or the taxable rate on your next dollar distributed in the future, is likely to be higher than it is today converting is likely a wise decision. The tax rate you pay is the only determining factor, regardless of rates of return or length of time you defer taxes.

What about lost opportunity cost?

One of the common objections to converting we hear revolves around the lost opportunity to earn a rate of return on the money that goes to pay taxes on a conversion. When you convert from an IRA to a Roth you have to pay taxes. Because you’re paying those taxes now rather than later it means those dollars don’t have the chance to grow. They are no longer “working for you” earning interest, or a rate of return if invested in the market. This belief prevents some folks from acting even when converting some of their money would benefit their long-term plan.

However, is this belief valid or a myth? The best way that I’ve been able to come up with to educate folks is a simple math equation. Let’s do this together.

I want to make this math is simple and easy for us to understand. Something we can really get our arms around. Using the rule of 72, we know that an account earning a 5.1% rate of return will double in value by the 14th year.

Let’s assume you have a $100,000 IRA. This is pre-tax money, and you were trying evaluate whether you should convert it to a Roth IRA or not. To convert the entire account to a Roth you would have to pay taxes on the conversion.

When do you pay the taxes? Next year when you file your taxes for this calendar year.

What about the $27,000 that you paid in taxes? It’s no longer working for you, and therefore you may be thinking that the conversion is costing you opportunity to enjoy compounded interest on that money. Isn’t that right?

However, there is one significant difference to point out. Even though the balances may be the exact same in our example, the account types are quite different. The Roth is never-taxed money. Any interest or rate return that is applied to this account going forward will never be taxed! However, the after-tax account is subject to income tax on any interest credited and ordinary dividends received. Any realized capital appreciation on invested assets will result in capital gains taxes. Therefore, you might argue that the conversion is beneficial even if your future tax rates will be the exact same as they are today.

Are tax rates likely to increase in the future?

A question you might want to answer for yourself is, “do I believe taxes will be higher or lower in the future.” If we just compare the progressive tax rates from 2017 to current rates under the Tax Cuts and Jobs Act (which took effect in 2018 and run through 2025) we can see that tax rates did in fact decrease. 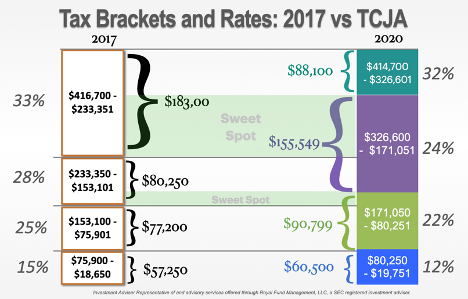 You may also notice that the tax brackets expanded making it more attractive to pay taxes at the 12%, 22%, and 24% tax brackets. There are even a few “sweet spots” in the 22% and 24% brackets where they overlap with what would have been much high rates from 2017. If no action is taken by Congress the TC&JA tax rates are schedule to sunset at the end of 2025, and revert back to the previous progressive tax rate scale from 2017.

Next, apply critical thinking to the federal government spending. Since the beginning of the COVID-19 pandemic the federal government has spent a lot of money to prop up the economy, and help families and businesses through this difficult time. The CARES Act, and subsequent legislation has added trillions of dollars in federal spending to an already ballooning annual US federal deficit.

Then there are the unfunded liabilities of our social insurance programs like Social Security and Medicare. These programs will continue to require greater and greater funding likely to result in the need for higher taxation of income in the future in order to sustain them.

If you really want to get an understanding of the magnitude of the US deficit view the US debt clock (https://www.usdebtclock.org/), but don’t linger too long. You’re liable to get overwhelmed and it may ruin your day. Just watch it long enough to understand that it may be better to pay off the federal government now rather than waiting. Let it motivate you to action, and take control over your future!

How should I pay for the conversion tax?

There are a couple of ways you can plan to pay for the taxes due when you convert from a pre-tax account to a never-taxed account.

If you choose to pay taxes out of pre-tax accounts one of two things happens. You either have less money going into your Roth because some of it was held to pay taxes, or you’ll have to take additional pre-tax distributions in order to pay the taxes on the conversion. The second action will cause additional taxation at your marginal tax rate. While Roth conversions may be done prior to age 59 ½ without a penalty for early withdrawal (because you’re not actually withdrawing the money), if you are under 59 1/2 and take distributions to pay the taxes on a conversion it will trigger a 10% penalty for early withdrawal from a retirement account. However, the penalty is only on the portion distributed to pay the taxes because it is considered a distribution and not a conversion.

Perhaps a more ideal way to pay for the conversion taxes would be to use after-tax money. For example, if you have money in a low interest savings account, a money market, cash equivalents in a brokerage account, or other low yielding cash accounts those would be an ideal to use to pay for the conversion tax. If you don’t currently have cash saved up and you’re planning ahead, you may start setting aside a little monthly savings in an account designated specifically to pay taxes on your next conversion. By using after-tax money, particularly low yielding savings in a taxable account, you will allow more of your pre-tax (IRA) money to be converted to never-taxed (Roth) money, avoid triggering additional income taxes resulting from pre-tax distributions, and avoid any potential for incurring early withdrawal penalties if you’re under age 59 1/2.

Once you have determined that you are a candidate for Roth conversions based on the framework we provided earlier it may be productive to consider specific reasons for acting. The following circumstance are common compelling reasons to convert that we see in our practice over and again.

Back to the original question. “When is a good time to convert to a Roth IRA?” If we take this literally, there are two specific times on an annual basis where we will advise clients whom are good candidates for Roth conversions to take such action.

There are two additional reasons to consider Roth conversions in 2020. Number one, if your income for 2020 has been reduced as either a result of retiring mid-year, or having been a disruption in employment due to the COVID-19 pandemic you may want to consider converting some of your pre-tax money. If your taxable income for 2020 is less than it was in 2019 (like when you retire mid-year), or you’re likely to have a higher income in 2021 than you are in 2020 (in the case of layoffs or furloughs followed by regaining full employment) take advantage by converting some of your pre-tax money in 2020 while your income is suppressed.

There’s another unique reason to consider conversions in 2020. If you were supposed to take RMDs in 2020 the CARES Act suspended them for tax year 2020. That means you don’t have to take them. Instead of taking the RMD for 2020 consider converting the amount you would have been forced to take. The resulting income tax is the same. However, you’ll be moving money from a pre-tax account to a never taxed account rather than from a pre-tax account to an after-tax account. Since RMD’s cannot be convert to a Roth, this year presents a unique opportunity to convert what would have been a forced distribution.

We’ve managed to cover a lot of ground. Just think, this was all to answer a single question asked by an attendee at one of our classes. As you can see, this is a complicated topic. There’s much to consider before you act. Your decision is final, and needs to be made by December 31st each year, so its best to investigate thoroughly and plan several moves ahead.

We would recommend that you work with a fee-based financial advisor who understands long-term retirement income and tax planning. It’s also advised to consult a tax professional before making any final tax related decisions.

Nevertheless, we’ve outlined several instances when you might want to think about conversions, laid out a frame work for deciding whether or not a Roth conversion is likely going to be a good fit for you, and shared five compelling reasons why you might want to consider converting some of your pre-tax money to never-taxed account.

As you make plans for your own transition from your working years to your post working years, look deep into the future. Ask yourself these questions?

If you’re finding it difficult to see into the future and answer these questions, our team at TWFG may be able to help. Use our Purpose and Timeline 5 Step Planning Process, sophisticated financial planning programs, and years of experience as a guide to uncover answers to the questions, and develop strategies that could help your family optimize Roth conversion opportunities. 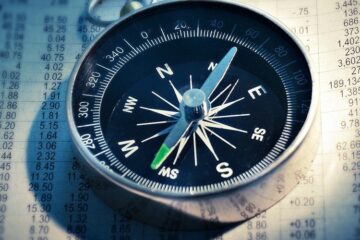 Mark Triplett | November 6, 2017 One of the most mystifying risks in retirement is the Order Of Returns risk. Investing in marketable securities exposes you to this risk. The future value of your investment Read more… 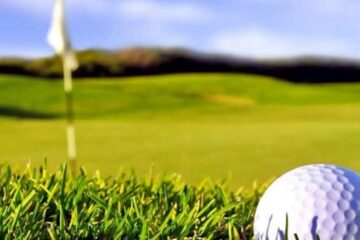 Mark Triplett | September 2, 2021 If you’ve ever worked for an employer who offered a workplace retirement plan, like a 401(k), you have probably completed a risk tolerance questionnaire at some point in your Read more…